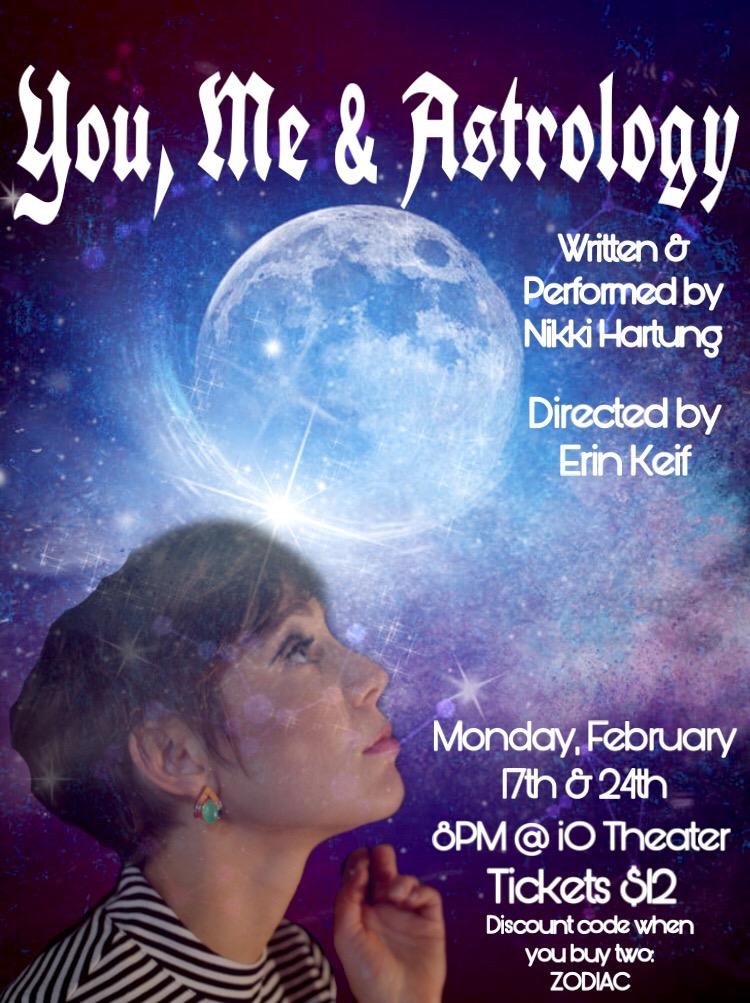 You, Me and Astrology

What about your star sign makes you YOU? And me, ME? And another Capricorn, SIMILAR to you. But different. Because of their moon in Scorpio ... Whether you know a lot about astrology, or nothing at all... you'll definitely know someone you see in this show.

Almost one-year in the making, the most extensive look into the twelve astrological star signs ever commissioned by the BBC (...if they were to commission this) and the first ever to be presented live on a stage. Join aquarian, Nikki Hartung, as she journeys into the chaos of the stars to find out what about YOUR star sign makes you, YOU? And another Capricorn, similar to you. But different. Because of their moon in Scorpio... whether you know a lot about astrology, or nothing at all... you'll definitely know someone you see in this show. The Cosmos and Planet Earth are interesting, but WE are more interesting.

"This show does a great job of relating to us [the audience]. Everyone has a sign, dates another sign or is friends with a different sign, so no matter what you're going to leave pointing to who you came with (or yourself in my case) saying, 'that's so you'." - Philly Fringe Audience Member

Performer Bio: Nikki Hartung is an Aquarian, Aries rising and Taurus Moon. Nikki received her MA in Classical Acting at the Royal Central School of Speech & Drama in London, UK where she studied clown under Mark Bell (The Play that Goes Wrong) and a BA in Theatre at the University of West Florida. Most recently she played Clara in the 2019 production of The Buttcracker: A Nutcracker Burlesque. She has performed/produced a stand up tour around Europe and regularly performs improv with Stable Manners at iO Chicago. Some recent credits include Emotional Nudity! Live! On Stage! (Second City) and Much Ado about Nothing (BRSP, Chicago). Nikki is also a voice actor (Xenoblade Chronicles 2) and a voice/dialect coach. This is her first ever solo show and she is so so so incredibly grateful to the people who have helped her, believed in her, to iO, to her family in Florida and, to Astrology.